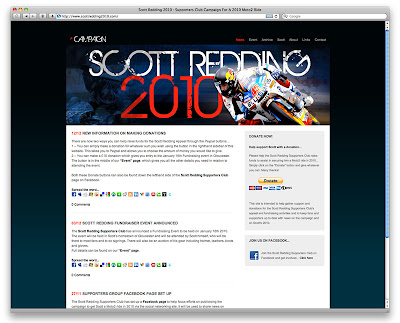 The second week of running my own business has been probably as busy as the first one (though admittedly the first week was made busy because of rushing BigZee in and out the vets – he’s on the mend now…) – and as well as signing off an iPhone application project (more of which in coming days) I ended the week with a marathon creative dev and build that was a one-day intensive project that I’m dead chuffed with. It’s going to require ongoing development and maintenance, but it’s a good cause and totally worth it.

Basically it’s furthering the work of the pimping of Scott Redding’s campaign to get a 2010 Moto2 ride that I publicised previously. It’s a website called “Scott Redding Fanclub” and it aims to push publicity and interaction with the cause way beyond Facebook. With the “Scott Redding Fanclub” project I delivered a website for the Scott Redding Supporters Club to help focus attention on their mission outside of the Facebook environment where it had largely operated before. Whilst over 300 million people use Facebook, over 6.7 billion people use the internet as a whole so it made sense to ensure that the campaign to try and secure Scott a Moto2 ride for the 2010 MotoGP season reached as broad an audience as possible.

The site will serve as an ongoing news magazine to cover events and fundraising activities run by the Supporters Club, to ensure as many internet users as possible find out about the cause and to enable easy access to instant online donation mechanisms.
Like I say, a good cause, and hopefully one that will engage all those many potential fans and supporters who don’t use Facebook.

Please share the news and the link, and ideally make a donation too if you can – Scott’s a superb rider and *anything* that can be done to move his career forward is a good cause.

UPDATE: I now run the Official Scott Redding website which can be found at www.scottredding45.com