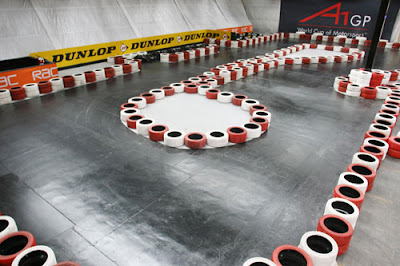 The most entertaining thing about the weekend’s F1 race in Singapore?
Without a doubt, Bernie Ecclestone avoiding Jake Humphrey’s questions on BBC by pretending to be a dribbling imbecile.
Whilst Jake (who I must admit I’m warming to) actually had the dangly bits to ask some serious full-on questions to Bernie (unlike the lamentable Eddie Jordan who simply stood next to him like a grinning idiot version of Peter Griffin’s dad off Family Guy) F1’s elder-eldest statesman simply disintegrated into chewing his lips off, glancing around like he didn’t know where he was, and simply repeating the questions and random words back at him; presumably in a desperate effort to try and confuse the interviewer.

As was the race. Dull as ditchwater.

The thing is that it’s absolutely unforgivable that the race should be boring, and certainly that it should be boring to watch. They spend kazillions of trillions of billions of dollars making it happen – and starting work on next year’s track before this year’s race has even happened and all those kind of ludicrous statistics. Buzzing city. Blazing lights. Blah blah, bleedin’ blah… What does it look like to the millions who’ve tuned in to watch it around the world (and probably from other worlds according to the PR hyperbole)…?
It looks like a flat dirty sidestreet surrounded by concrete walls and mile-high fencing.
Astonishing.
All that money, all that effort, all that time and preparation, and it looks like somewhere very grubby between Brixton and Loughborough Junction. Shameful.
Marginally less impressive than the Streatham Raceway. Which is where it should be relocated to in F1’s budget-cutting moves. Nobody would notice the difference.