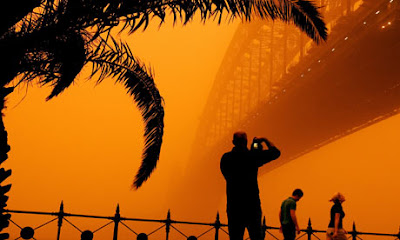 (*Nabbed from The Guardian…)

As dust ravaged the east coast last night, heavy rains lashed Adelaide in the nation’s south where streets were flooded.
Then as morning dawned, two tremors shook Melbourne. Later in the day, hail stones as big as cricket balls pelted parts of New South Wales where heavy rainfalls are now expected and flash-flood warnings have been issued.

The Bureau of Meteorology said it was the worst dust storm since the 1940s, with particle pollution up to 10 times worse than the previous record and was predicting another storm would hit in the next day or two.