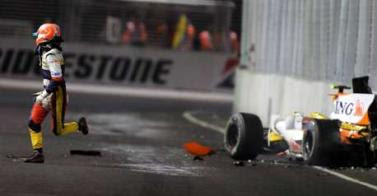 “The World Motor Sport Council concludes that Mr. Alonso was not in any way involved in Renault F1’s breach of the regulations.”
FIA statement, 22_09_09

Now when I compare those two statements – and bear in mind that Eddie Jordan’s was a reaction to the FIA statement and ruling – I’m left with the distinct impression that surely Fernando Alonso could make a tidy few quid by ringing his lawyers right now.
Jordan has been an utter pillock on the BBC coverage this year – one of the few truly awful things about the BBC’s basically decent F1 product – but by any standards this is surely a total clanger.

The context in which he made it was that he was saying that Frank Williams should still be angry because his driver came second in the 2008 Singapore GP (which Alonso won, and which was the race that “Crashgate” / Nelsongate” etc revolves around)…
Now saying that Alonso’s first place might be sullied by the fact the scandal surrounding the machinations of Briatore, Symonds and Piquet Jnr is one thing – but it is a very very different matter indeed to maintain that “Alonso clearly cheated”, especially when the FIA (mad and inconsistent bunch of freaks that they are) have just exonerated him 100% in the matter a mere 2 or 3 hours earlier.

To me it’s just another sign that Jordan should shut the hell up and go away for good. (Unless of course he actually meant to say anything remotely like what blurted out of his mouth…? In which case he should be telling us exactly *how* Alonso clearly cheated, surely – or presenting his evidence to the FIA…?)
But it’d be hellish funny to see Alonso’s lawyers take him to the cleaners on the way.