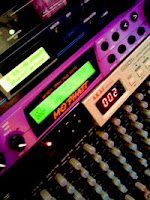 I’ve uploaded another piece of music; again under the “Rain Dogs” monicker.
It’s something that I’d kind of done before – but was never 100% satisfied with… It’s called “in transit” and originally the main groove was done in a patch that was basically something like treated white noise. Also the trumpet sound that I used wasn’t the best (although it was very nice).

Now, using Logic 8 and with the help of the software synths like Smapletank and Absynth, I’ve been able to revisit it – and have pulled apart the groove into a number of separate elements of things like dulled metallic hits and strangely EQ’d toms with an extreme ping-ponging left-right delay on them, and found a great muted jazz trumpet patch to work with (and a nice CP80 piano sound) – and as a result I’ve found it relatively easy to go back and strip down and completely reinvent the arrangement.
It’s now totally what I had in my head originally. And that’s a good thing.

The last couple of nights I’ve been doing the annoying bit of trying to sort out the detail of the final mixdown and to master it very carefully without losing the vibe/feel of the whole thing in the process.
I think I’ve done it, and if you want to hear the result, you can download “in transit” here…

Trust In The You Of NowMusic
Luke Jackson – “Goodbye London” VideoMedia, Music