Anthony Davidson Back Behind The Wheel 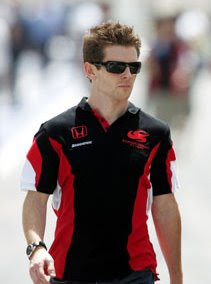 I was hugely disappointed when Ant Davidson slipped out of F1 with the collapse of the Super Aguri team in 2008. He was always one of my favourite drivers of the modern era; a great racer and a great developer/tester too… your kind of ideal man in any team really.
(And also someone pretty much devoid of ego – very refreshing and likeable in today’s F1).
The good news – apart from the fact that he’s a brilliant commentator (press your red button on the BBC’s F1 coverage and get swapping the audio channel to him and David Croft on Radio 5 Live!) is that he still has his hand in as a driver, and now there’s some great news of his entering one of motorsport’s legendary annual events this coming month.

Aston Martin Racing recently confirmed that Ant will be one of three new drivers recruited to enable the team to run a trio of Gulf-liveried LMP1 cars at this year’s Le Mans 24 Hours, which marks the 50th anniversary of Aston Martin’s first victory at La Sarthe in 1959. Joining the existing Aston Martin drivers along with Ant will be Stuart Hall (GB) and Jos Verstappen (NL).
Ant recently tested Aston Martin’s LMP1 car in Portugal, completing three one-hour stints and is a familiar face in this category of motorsport as he worked with the team in 2003, racing at Le Mans, Sebring and Petit Le Mans in the GT class.

“Particularly as a British driver, racing for a team as prestigious as Aston Martin is a fantastic opportunity,” says Ant… “I know the team and its capabilities extremely well from the past, and I’m convinced that there is nobody better prepared to tackle all the challenges that Le Mans will present us with. At the test I felt comfortable with the car straight away, and now I’m looking forward to taking the fight to the other teams at Le Mans. I’m certainly aiming for us to be the quickest petrol car there and hopefully we can get in amongst the diesels as well.”

Best of luck Ant – hope you do brilliantly :-)