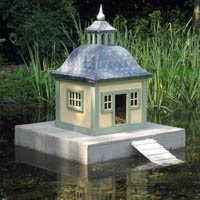 Sorry about the tabloid headline by the way. Couldn’t help it.
The latest news on the expenses scandal is the revelation that those who are forced to quit over their thieving from the public purse are likely to get huge pay-offs and pensions… Given how the government has been so adept at rushing through ’emergency’ legislation to try and curb our human rights I’ll be shocked and disappointed if they don’t rush something through to prevent such payouts.
Who am I kidding – I’ll be not in the least bit surprised if they do bugger all.

Also, the ludicrous Douglas Hogg MP – from now on to be called Mr Moativator – has actually been bettered by another Tory stereotype, Sir Peter Viggers, who spent well over one and a half grand of our money on what has been described as either a “Duck Palace” or a “Duck Island” – one of which sounds like a Chinese restaurant and the other a very disappointing pirate movie. I personally think it’s best described as a “fucking liberty”.

The other update is that Hazel Blears’ head is now considered to be in serious danger of falling off altogether. It’s been madly bobbing around like a bladder on a stick for sometime now, but anyone seeing news reports from the last couple of days must surely be alarmed at the wild rocking and rotating that’s developing. Like something out of the Exorcist really…
She needs some scaffolding round it, and sharpish too. But she can pay for it herself, the scheming old bat.