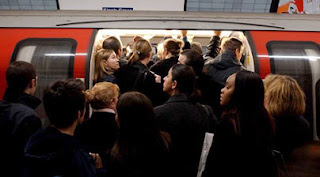 Quite a nice new development from TFL, the people who bring you tube trains. Sometimes.
It’s a new web tool called “Departure Boards” which as the name suggests, provides upcoming live train information in exactly the format you would see on the departure boards at any given station.
You simply select any station from any line, and – whoomph – there it is.
Excellent piece of work, and one that could only be seriously bettered if it were translated into a bespoke iPhone application; something which has in fact been done here by awavana.com – and very nice it is too.

Although the interface and execution are nice – and it is genuinely a great idea for communicating data, there does remain the question of the relevance and accuracy of the information itself. Let us not forget that last year the Departure Boards at Gunnersbury Station (District Line, Richmond Branch) were actually nominated for the 2008 Whitbread Prize For Fiction…

(*Okay; so that last bit was untrue… But only because nobody had the presence of mind to fill in a nomination form)