Shut Up, For The Love Of God Man, Shut The Hell Up 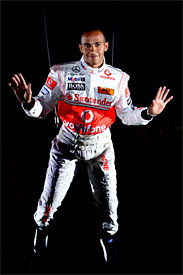 Lewis Comes Back Down To Earth

Although I tend to label myself an ex-F1 Fan nowadays, I must admit that I’ve found myself watching a bit of racing this season. I’d have probably watched a bit more if most of the Sepang race hadn’t taken place under cover of tarpaulins on a monsoon-hit main straight in the dark. But nonetheless it *has* been kind of entertaining.

Apart from the continuing fairytale of Brawn GP, one of the funniest – yet also hugely grating – things has to be continuing disintegration of the sainthood of Saint Lewis Hamilton. And his outburst following today’s Spanish GP just continued to confirm the kind of driver McLaren can be so proud of, repeatedly bitching about the car again and again.
I don’t think I’ve encountered such a prissy whinge since my mum last read me “The Princess And The Pea”. And I wasn’t too impressed by the attitude then either…

In my decades following F1, I’ve continued to see pretty much all drivers – and certainly all the best drivers – intimately involved with the development of their machinery; ever more so as F1 technology became more and more sophisticated. Guys such as Schumacher and Hakkinen had great reputations in this respect, and don’t forget Anthony Davidson whose technical input and driver feedback on the track and in the factory was famously highly regarded over the years.

So, since when did it become okay to just turn up and drive?
And bitch if things aren’t going swimmingly?
I’d love to know, as to me it just looks slack and demeaning – and certainly not the attitude worthy of a world champion… (It also makes you think again about all the denials that Hamilton used to just copy ‘Nando’s setups at each race back in ’07…)
Let’s be honest, the guy has had a supreme set of wheels the past couple of years – and managed to lose a championship in one of them – and he can’t expect things to always be perfect. Surely he was in some way a part of the development team for the car? (And if not, why not…) And surely his best move would be to button it (no pun) and lend some energy and driver input to making a better job of it.

The immature attitude – and the apparent belief that he merely needs to show up at the track – also makes me sad as it seems to be part and parcel of a diminishing McLaren team. I haven’t always supported McLaren (my allegiance moved to Wolf when James Hunt did, and then to Ligier and Ferrari along with Didier Pironi, and so on and so on…) but I have always admired them in a huge way. And their continuing disintegration around their superstar is nothing short of tragic.

McLaren need a genuinely stellar figurehead back in place (and that’s not Lewis’s dad) and a team that functions as a team for a greater purpose than a single (and possibly undeserving) prima donna of a driver.
And they really need to keep Lewis away from the microphone more often.
Ideally by getting him to help work on the car.
But just keeping him away from the microphone anyway would be a good start.

May The 4th Be With YouGeneral
How To Make A Bad Situation BetterGeneral, Politics