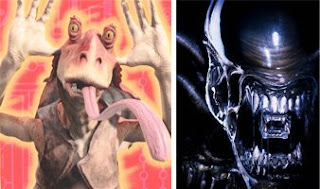 Although I’m not anything approaching a ‘Trekkie’ or whatever the term is, there’s no doubt I’m a bit of a geek. And to be honest I’m kind of looking forward to the new Star Trek film.
Hanging off the edge of its release are many articles and bits of feature writing – like this quite good one in the Indy about Vulcans, and how they are a superior species to us. Although of course they’re not superior, since they don’t actually exist; something which surely has to be considered as a drawback in any species really…
It also discusses the concept of creating fictional races in sci-fi, and how they can be very human-like, or utterly horrifying (although they fail to mention how Jar-Jar Bloody Binks strangely manages to fit into both categories…)
It’s also worth the read, if only for Patrick Moore’s priceless quote:
“There isn’t a planet Vulcan, of course, otherwise I would have observed it.”