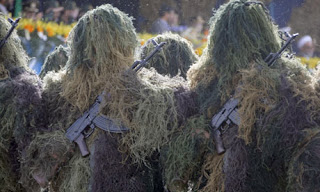 News from Iran: Whilst the world’s attention has been focused on Mahmoud Ahmadinejad’s verbal attack on Israel at the UN Racism conference (though Israeli heckling and disruption beforehand & the boycott of people like the USA is apparently perfectly okay… you can behave like total wankers and get away with it so long as you’re not Iranian it would appear), few seem to have noticed that the Iranian army actually paraded Wookiee snipers through the streets of Tehran at the weekend on the country’s annual Army Day.
This should be of far greater concern to Israel – as these fellas, particularly if combined with a crack-squad of Ewoks, are bloody dynamite.
Wookiees originate from Kashyyyk (which now that I think about it could possibly be an Iranian name) and contrary to the photo, tend to prefer the bowcaster over the AK47.
You can find out more about them at Wookieepedia. Naturally.