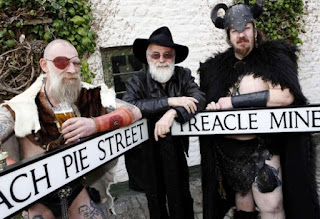 In one of those “It could only happen in England” stories, the Somerset town of Wincanton is twinned with Discworld.
It’s actually slightly old news in a sense, the town originally twinning with fictional Ankh-Morpork back in 2002. But the latest development shows the line between reality and fiction getting ever more blurred as Pratchett paid a visit to the town to see new street names such as Peace Pie Street and Treacle Mine Road, which have just been named after places in his books.
Not entirely sure how this twinning arrangement pans out for exchange visits and the like, but nice to see some fun, imaginative thinking in the world of local councils – and hopefully a useful means to extending the popularity of Terry Pratchett and his wonderful creation.

And certainly sweeter than Grantham, who instead of going down the traditional twinning route, recently formed a suicide pact with the Kingdom of Mordor.
That’s a lie of course.
Though not necessarily a bad idea.