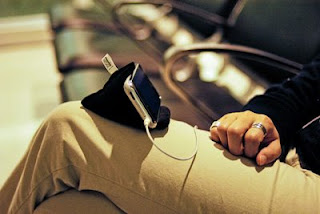 Okay; now I’m not saying that this ‘gadget’ (it’s a beanbag) isn’t useful… No, only that perhaps the actual trademarking of “Moviewedge” may be a tad unncessary. (Because it’s a beanbag).
The Moviewedge (TM) is a $9.95 solution for propping up your iPhone (much as you could prop it up with, say – a beanbag) in order to watch movies on it.

And because it’s so well designed to accommodate different shapes (*alternatively read: “because it’s a beanbag”…) it works with a wide variety of portable media devices such as Apple’s iPod Touch and iPod Nano, the Sony PSP and Microsoft’s Zune; mobile phones such as the Apple iPhone, Samsung Instinct, Blackberry Storm and basically any other device.
A pretty nebulous product spec I’m sure you’ll agree. You can only imagine that whichever caveman invented the beanbag is kicking themselves they didn’t patent it now…

Here’s the feature list as spelled out on the Moviewedge website…
• Holds your device in place on uneven and unsteady surfaces
• Variable viewing angle
• Compatible with almost any case or enclosure your device is in
• Soft microsuede covering perfect for wiping screen
(*Each of these points above can be translated as “it’s a beanbag” incidentally.)

Is This The New Quicktime?Technology
Snow Leopard Set For June 8th ReleaseTechnology