Not Always MotoGP But Always Hot 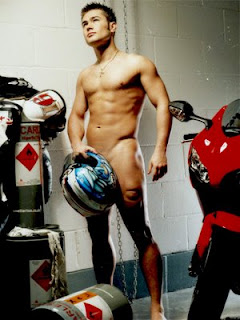 (*Above: the kind of thing you’ll find at MotoGPHotties.com… You pervert.)

Given that this blog is so random anyway, I hope you’ll forgive the blatant plug for another website – as I’m duty bound to pass on the word.
Although it has the word “MotoGP” in the title (STOP FALLING ASLEEP THERE!!!), MotoGP Hotties – (MotoGPHotties.com – brought to you by the people who made the popular MotoGP Hotties application for Facebook) is probably bound to appeal way beyond those interested in the racing.
A website that’s particularly aimed at the laydeez (and a few of the guys too) it’s a pretty much daily dose of totty from the various categories of motorcyle racing: MotoGP itself, and its lower categories – 250cc and 125cc, and also World Superbikes, British Superbikes, World Supersport, the Spanish CEV championship and more.

There’s already the odd bit of partial, generous nudity and some of the poses do lean towards the homoerotic. It’s all basically good clean fun though and looks like building into a pretty vast ongoing archive to keep happy all those who are either:
a) interested in much more than the bikes and the racing,
b) not able to give a toss about the bikes or the racing.

Could Be WorseGeneral, Technology
Have The Humanists Got It Arse Over Tit?General, Media