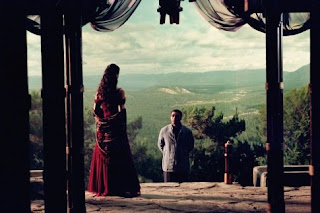 If UK gossip merchent Holy Moly is to be believed and Chiwetel Ejiofor had already turned down the role of the next Doctor Who (now gone to Matt Smith, of whom the producers/writers said “we knew we’d found our doctor” when he showed up as their third audtionee) then it’s possibly a very great shame indeed, and could rate as one of those “the greatest … who never…” missed opportunities.

Holy Moly describes Chiwetel Ejiofor as a Shakesperian actor – something which whilst true, actually ignores a superb film role of his which could give clues as to how intense and profound a performance he could have brought to the show.
I’m talking of his part as “The Operative”, a sociopathic assassin tracking down River Tam on behalf of the Alliance in the Joss Whedon’s superb “Serenity” – the big screen outing of the much-missed Firefly mob.

The Operative was clearly unhinged and completely principled *and* unprincipled – a truly dangerous and fascinating character who brought down seven tons of shit on Mal, his crew and anybody they knew, throughout the course of the movie.
That kind of intensity played with utter cold conviction and calmness and purpose would have been an excellent marker for possibilities with the Doctor, and given the current incumbent’s penchant for SHOUTING A LOT and getting quite emotionally messy and pulling staggering faces, becoming overwrought and then GETTING A BIT SHOUTY AGAIN, Ejiofor might well have also been a genuinely interesting departure.

Narnia; A Fairy Tale. No Really…General, Media
Could Be WorseGeneral, Technology