“You Don’t Need Freud When You’re Dealing With Caligula” 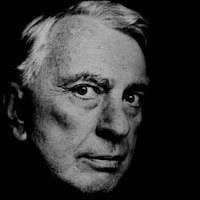 A choice gobbet from the fab Gore Vidal on a Guardian page of contributions from various writers and artists, examining what the paper curiously refers to as the ‘cultural legacy’ of the soon-exiting George Bush. Something which should make for very few words indeed.
The piece can be read in full here…

Here’s a bit more Gore…
“Although all politicians tell lies, Bush has gone right round the bend as a liar and he’ll be remembered for a great many of the lies, starting with weapons of mass destruction and going on and on. That’s the only legacy.
Oliver Stone, I gather, is doing father-and-son stories. I’m very fond of Oliver, but you don’t need Freud when you’re dealing with Caligula…”

Other contributors include Edward Albee, Naomi Wolf and Daniel Libeskind.

As One Threat Subsides, Another Pushes ForwardPolitics
Yes, It’s An Election PostPolitics