As One Threat Subsides, Another Pushes Forward 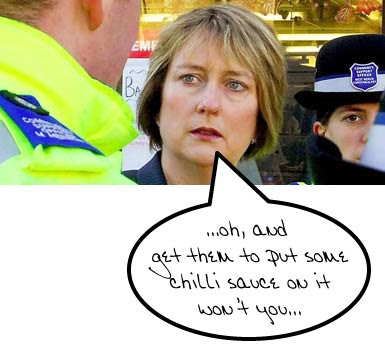 (*Above: Totalitarian mentalist Jacqui Smith gets to grips with policing priorities)

Although it was brilliant to see the House of Lords shit on the 42-day detention bill – and also hilarious yet irritating to hear Jacqui Smith’s horrendously patronising “you may not care about terrorism but I do” comments afterwards, it looks like the malevolent good-for-nothing old bat is getting her revenge in quick with this nasty piece of work…

It’s to be resisted at all costs of course – hopefully we’ll be pleasantly surprised by the Lords again (there’s certainly little hope of finding anybody with a spine in the Labour benches to shoot this kind of crap to bits).
Time to join PROTECT THE HUMAN if you haven’t already done so.

Should we really be entrusting the liberty of our citizens to this preposterous woman who’s so bloody paranoid she thinks she deserves a medal for going out and buying a kebab?